Threads may be cut or chased in a variety of ways both by hand and by machine. While thread cutting on a lathe can be a challenging process, it can also yield sufficient results. Advances in tooling materials (threading inserts) and coatings have extended the life of the threading tool and have helped immensely with chip evacuation.

Another one of the most commonly used methods for producing or cutting threads is with the use of a die. Dies can be used in lathes, screw machines and CNC lathes to produce both internal and external threads by cutting or by rolling. When using a die, there are several thread chasers that cut the thread then back away from the work to permit fast removal of the tool. Each set of thread chasers is designed to cut a different thread. One set of chasers would be used at a time, but each, in turn, to ensure that the new threads are cut to the tolerance depth. With most die heads the die holder releases or opens when it is reversed. Internal threads are cut with a collapsible die head.

Threads may be applied to a bolt or other cylindrical object by rotating the part between two opposing dies. As pressure is applied to the workpiece by the dies, the part is deformed, and the material is displaced and flowed with the resulting shape being a thread. Threads which are rolled are often tougher due to work hardening than threads that are cut by dies or by a threading insert. Thread rolling also has the advantages of being a must faster production process. Thread rolling is also referred to as a cold-forming process.

Regardless of the method used, threads have certain nomenclatures that must be considered when preparing for production. They are: 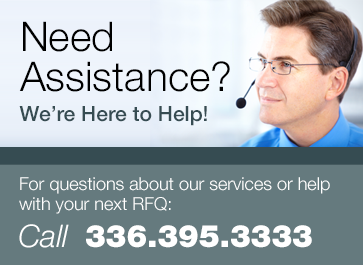 Hear What Our Customers are Saying

“Thanks to SourceHorizon, we have developed two excellent machining sources for aerospace quality machined parts.”

“We have developed a great new supplier and are very impressed with their responsiveness, quality, and integrity.”

We can help you find the right supplier for your project.